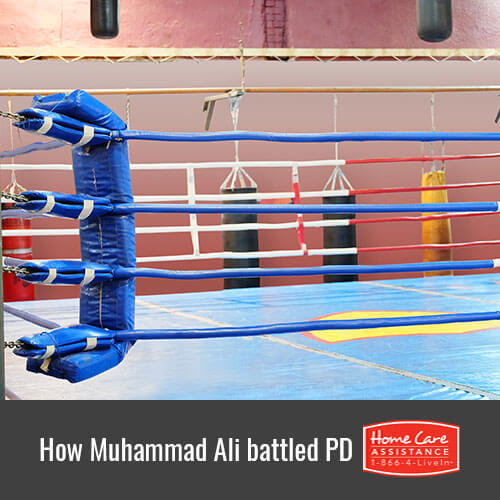 Muhammad Ali was one of the most well known people who battled Parkinson’s. Throughout his fight with the disease, Ali remained positive and always ready to help others within the Parkinson’s community. Waterloo in-home senior care experts examine the ways Ali faced his disease like a champion.

Tremors, speech impairment, and changes in movement did not cause Ali to panic. He was accustomed to issues like these from boxing, but the problems would generally disappear. When Ali’s tremors did not go away, he went to see doctors, but they ruled out Parkinson’s because they felt he was too young. Because people at the time did not have much knowledge pertaining to this disease, it comes as no surprise to learn Ali was diagnosed with other complications before finally learning he had developed Parkinson’s.

Parkinson’s does not immediately cause people to lose their full mobility. After Ali was diagnosed with Parkinson’s in 1984, he continued working out for 10 to 15 years. Ali encouraged others to exercise because the physical activity could help alleviate the symptoms associated with the disease. Parkinson’s can progress swiftly for some people, but it may still take years before they need to cut back on their physical activity.

Accepting the Disease Gave Him Determination

Though Ali was always hopeful a cure would be discovered, he accepted his fate and was not angry. Instead, he worked tirelessly to help bring awareness to the disease, hoping for better treatments and a possible cure. This is one of the many reasons why Ali was a champion in his battle against Parkinson’s.

Ali’s prominence helped bring more awareness to Parkinson’s. Many people were under the misconception the disease only affected senior citizens or non-athletes, while others believed it confined people to wheelchairs. Ali took advantage of his increased popularity, and he hosted annual Celebrity Fight Night events to raise money for the cause. It is estimated these charity events raised hundreds of millions of dollars for Parkinson’s disease research.

Battling Parkinson’s takes one day at a time and often requires assistance. If your senior loved one needs help managing Parkinson’s symptoms and wants to live a happier and healthier life, reach out to Home Care Assistance, We are a leading provider of Parkinson’s home care Waterloo, ON, seniors can count on, and our caregivers are available around the clock to assist with tasks like exercise, meal prep, and medication reminders. For more information and to schedule a complimentary consultation, please call one of our Care Managers at (647) 992 0224.